What happens when a tenant fights back?

My client had signed a lease and paid six (6!) months’ rent up front. Then she continued to pay rent on the first of each month thereafter. My client paid a total of 11 months’ rent before moving out. The landlords never sued her; however, they never provided her an accounting for damages to the property nor did they return the money she had overpaid.  While the court held that some damages precluded the return of her security deposit, judgment was ultimately in favor of my client to the tune of 3 and one-half months’ rent – her original overpayment.

And that’s the value of hiring counsel.

That’s right, friends, www.slepnerlaw.com is finally live!! Check it out!

At least the Bankruptcy Court for E.D. Pa. is.  See the order: http://www.paeb.uscourts.gov/sites/paeb/files/NoticeofOperation.pdf.

The FBI raided the Philadelphia Sheriff’s office yesterday.  More details here:  http://abcnews.go.com/US/wireStory/fbi-raids-philly-sheriffs-office-takes-files-19975429.  If you are facing a sheriff’s sale, you probably don’t have to worry about moving for a while.

Yesterday I had the honor of sitting as an arbitrator in the Philadelphia Court of Common Pleas arbitration center.  Back in February, I took a CLE course on the ins and outs of how to be an arbitrator.  The course reviewed rules of evidence and procedure, and showed how arbitrators can best handle situations that arise in the arbitration room.

I arrived at the arb center before 9:00 AM and was assigned to a panel.  My fellow arbitrators were both more seasoned lawyers, and I discovered one of them lives and works close to where I grew up in the Northeast.  Invariably, shop talk and war stories were exchanged between us.

The first case of the day came before us, involving a car accident and featuring a Russian interpreter.  We found in that case that the defendant bore 70 percent liability, and awarded medicals and damages as such.  The second case was also a car accident.  In that matter, although the plaintiff was (in my opinion) not very credible, we found that the defendant bore 100 percent liability; however we limited the award based on the plaintiff’s presentation.

It was a fascinating insight to sit on the other side of the arbitrators’ table.  We weighed the facts presented to us carefully – including the voluminous case memoranda presented by counsel.  We were also fortunate in that in both cases we heard, all parties were represented by counsel.  That made the proceedings go a lot smoother.  I have arbitrated cases in which I was the only attorney present.

All in all, A++, would arbitrate again.  I encourage all attorneys, no matter what stage of their career, to sit as an arbitrator at least once.

Today the Honorable Ellen Ceisler of the Court of Common Pleas found in favor of the appellants in Lewis, et al. v. Zoning Board of Adjustment, et al., stating that there was no hardship and thus no reason for the variances to be granted.

The developers in question in this case had sought variances to completely demolish two historic yet dilapidated (but salvageable) marble bank buildings at the corner of Front and Norris Streets in East Kensington.  The developers sought to cram in a large, dense, multi-unit housing project for impoverished women and children directly under the El.  Furthermore, the local civic association had sold the parcel to the developer subject to a mortgage – a typical Philly move.  Thanks to a number of concerned neighbors who appealed the decision and my good friends the Fishtown Lawyers, the bank buildings remain. The banks were and continue to be a link to Kensington’s vibrant industrial past and a symbol of potential for the neighborhood going forward.  I am proud to have represented the local civic associations, East Kensington Neighbors Association and Fishtown Neighbors Association as well as another individual stakeholder, as amicus counsel in this matter.  Just part of giving back to a great neighborhood and proving that on occasion the system does actually work.

They say lawyers are full of shit, but they haven’t prepared for a colonoscopy recently. 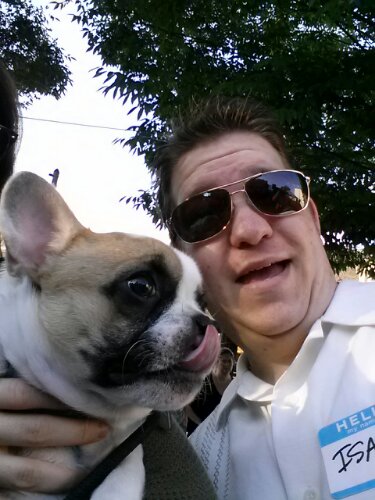 Catch my interview on NBC 10 News today 4 – 6 pm) as I discuss L&I and expediters in the wake of last week’s collapse.

It appears that the attorney is not only creepy but is seeking to hire someone to violate the PA Rules of Professional Conduct, particularly, the prohibition of direct in-person solicitation of potential clients.  Is this something I should be (Perhaps anonymously?) reporting to the Disciplinary Board?

I have a feeling I know who the original Craigslist poster is.  I’m obviously not posting that lawyer’s name here; however, if anyone has any further knowledge of this they can contact me at isaac@slepnerlaw.com.  I’m not a fan of seeing ethical breaches flaunted this openly.

Faye's Thoughts on the Law

Musings on the Music Industry

My thoughts on the law, Philadelphia, Fishtown, and life in general

The latest news on WordPress.com and the WordPress community.